The most iconic helmets in European motorsports

Although the likes of Formula One and MotoGP are getting back into the swing of things, other racing series have been written off for 2020. So, to fill that gap, we’ve listed the most iconic helmets to grace European motorsports.

We’ve not just organised by the fanciest-looking lids, though – all of our picks have significance. Whether it’s the helmet Schumacher wore when he broke a near-50-year record, or Marc Marquez’s when he became MotoGP’s youngest-ever champion. That being said, a few of them are also works of wearable art.

And the admiration goes well beyond the chequered flag, with their helmets and racing suits fetching, in some cases, six-figure sums. 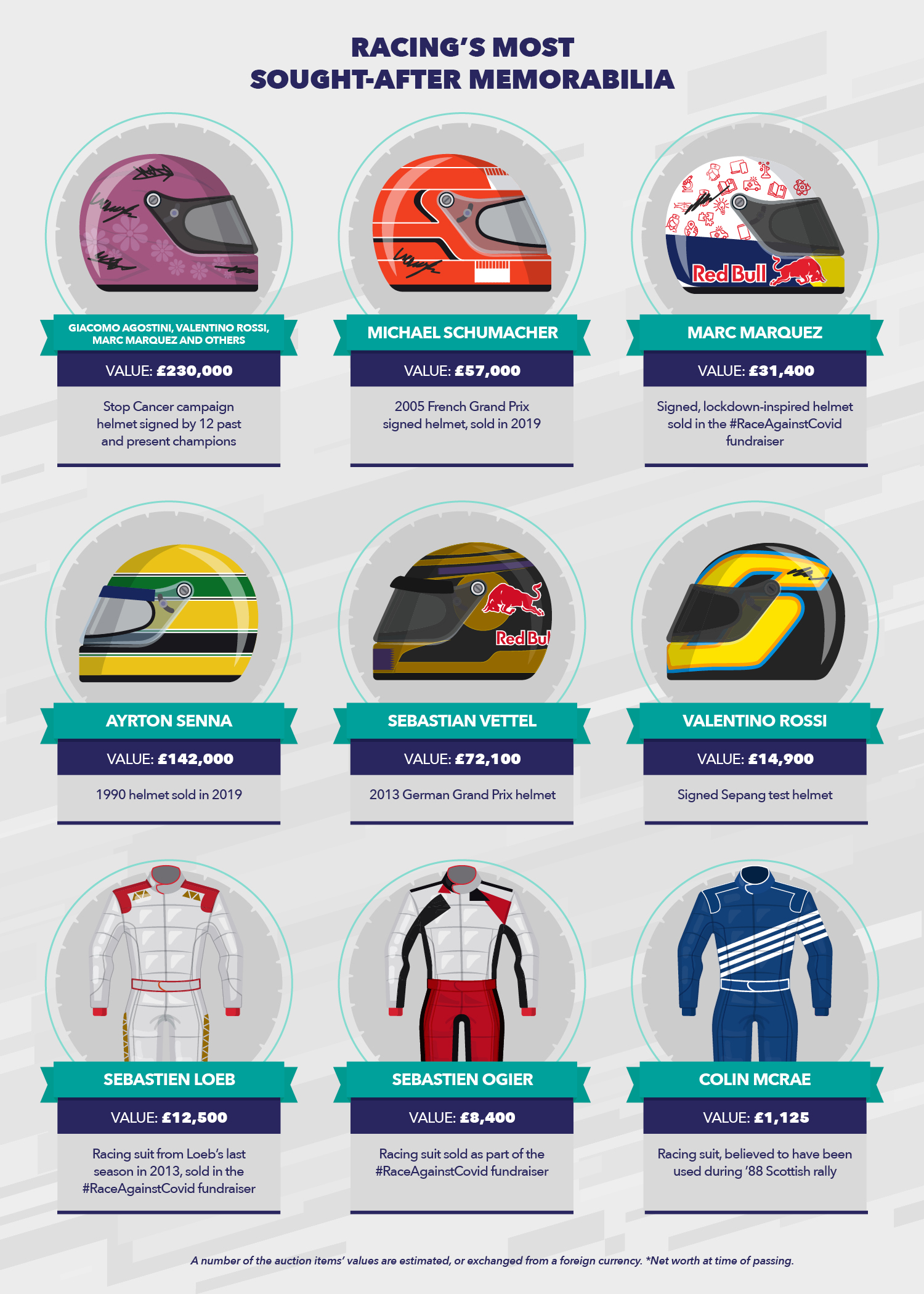 The helmets and racing suits worn by our picks immortalise their countless victories and championships, and there are just as many keen bidders.

Topping our list of the most expensive auction items is the Stop Cancer charity campaign helmet, which went for £230,000. Although not a race-worn item, it was signed by 12 motorcycle champions of past and present, including Valentino Rossi, Giacomo Agostini and Marc Marquez. Also passing £100k was Ayrton Senna’s 1990 lid, complete with team radio, for £142,000.

A number of the items on our list featured in the #RaceAgainstCovid fundraiser, with Marquez’s lockdown-inspired helmet and the World Rally Championship racing suits fetching over £50k combined. In all, the event raised £845,472.

It’s only right we get underway with a look at racing’s premier class. Granted, we could’ve dedicated a whole post to F1 and its countless icons, but we’ve done our best to highlight some of the more notable heroes.

One whose inclusion will disappoint very few, however, is Ayrton Senna. Considered by many to be one of the sport’s very best, the Brazilian won three F1 titles in his signature yellow helmet. Through the visor of his 1991 edition, he grabbed eight pole positions and seven first-place finishes on the way to his final championship.

He’s joined in this category by record holder Michael Schumacher, who took Juan Manuel Fangio’s 46-year crown in 2003, and Sebastian Vettel, who became the youngest-ever champion in a final-race showdown in 2010. 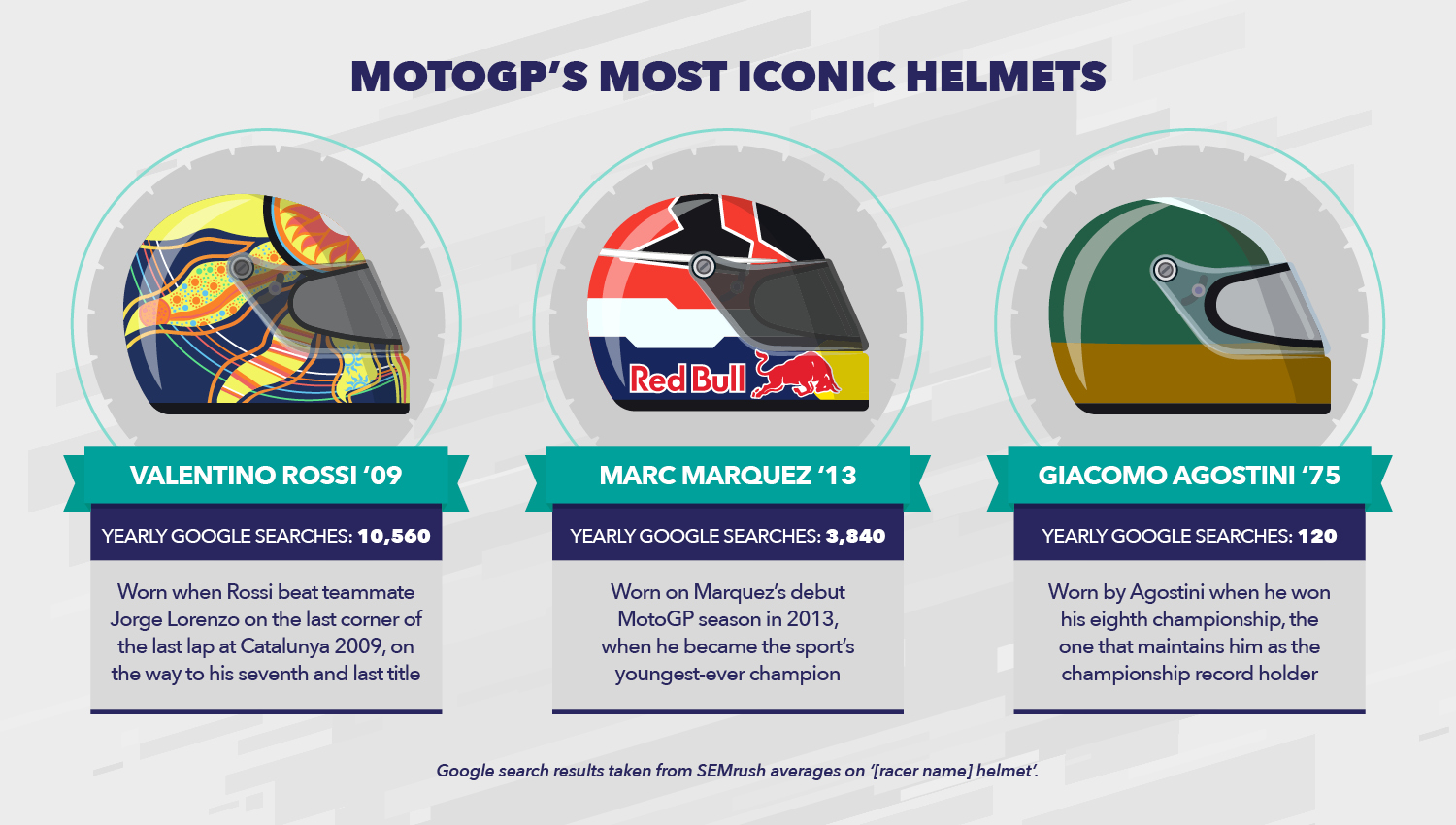 We’re all for debate, but when it comes to top-class racing on two wheels, there can be no contesting Valentino Rossi’s place.

The seven-time world champion – perhaps the most recognisable racer of the modern era – has had countless worthy helmets, but we’re going with the design he wore in his last championship-winning campaign in 2009. The sun-and-star style was front and centre for the Catalunya GP, where he overtook teammate Jorge Lorenzo on the last corner of the last lap to take the win – one of MotoGP’s all-time best battles.

However, Rossi sits second in the table of title holders behind compatriot Giacomo Agostini, who won seven championships on the trot between 1966 and 1972, then again in 1975. They’re joined on our roundup by current defending champion Marc Marquez, who’s broken seemingly every ‘youngest ever’ record there is since his MotoGP debut in 2013 – including, most notably, the youngest to be crowned champion. 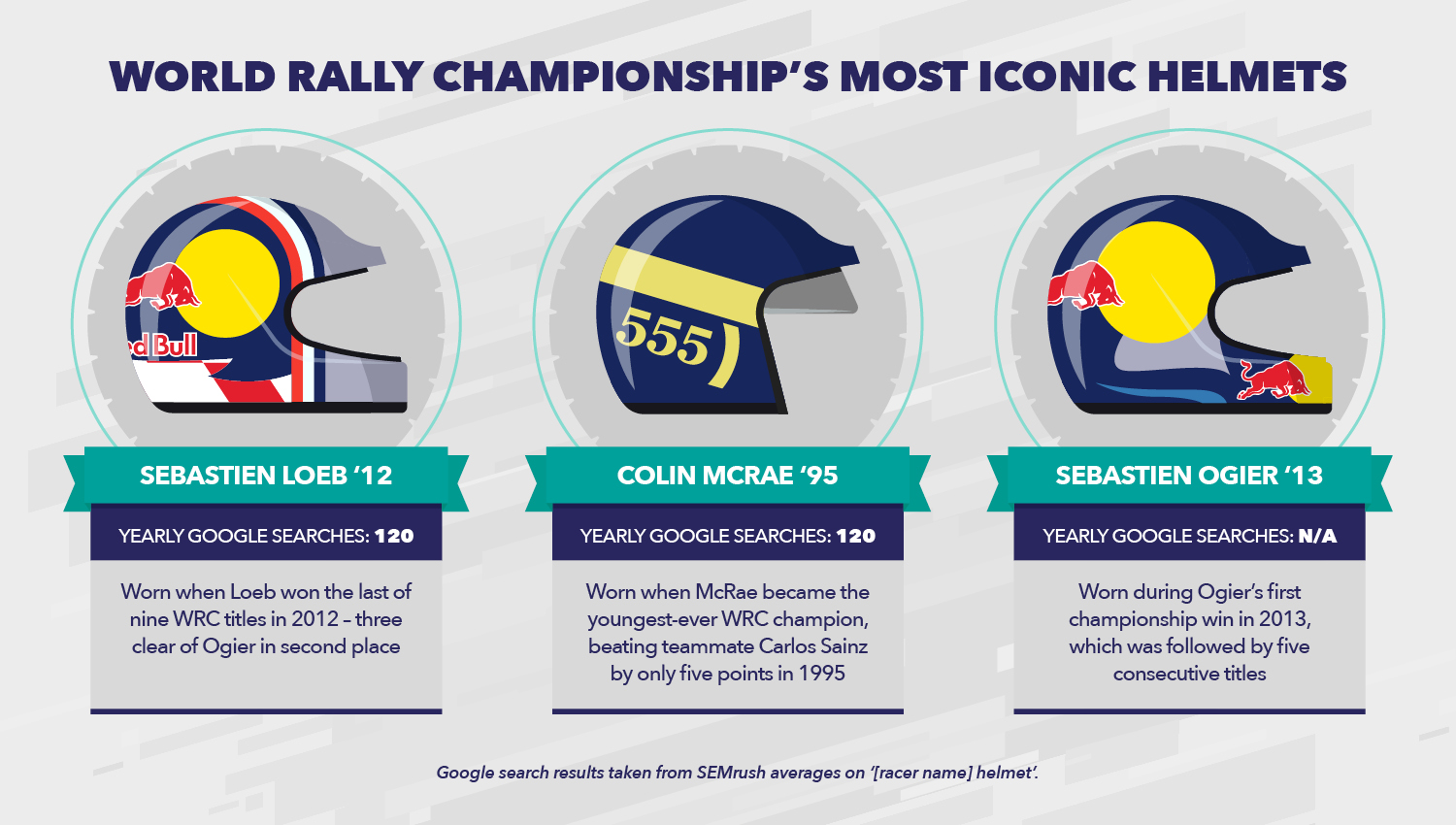 If F1 and MotoGP are the sensible siblings, the World Rally Championship must be the black sheep of the go-fast family. As a less forwards, more sideways style of racing, WRC is home to some of the most renowned racers of any sport.

And few more so than Sebastien Loeb, who holds a record nine titles – all of which he won back to back between 2004 and 2012. But it’s Colin McRae whose name is arguably more known.

Despite only winning one WRC championship in 1995, the Scot still holds the record for being the youngest to do it, beating Subaru teammate Carlos Sainz (father of F1’s Carlos Sainz Jr.) in a tense rivalry that was split by only five points. The team’s blue and gold also has a legacy of its own, even long after McRae’s passing in 2007, as a popular colour scheme for Scoobies on UK roads.

Sebastien Ogier is also a worthy mention, as WRC’s second most successful driver after Loeb, with 48 victories and six consecutive titles. Despite having three less than Loeb, however, Ogier is the only driver to top 2,000 points.

Because of the glaring omissions, it’d be harsh to leave our list at just eight. Any mention of European motorsports, for example, surely must include 24 Hours of Le Mans, the world’s oldest active event in endurance racing.

Tom Kristensen, Le Mans’ most successful racer, has nine wins at the Circuit de la Sarthe, six of which were back to back. The track also forms one third of the Triple Crown of Motorsport – a motorsport achievement comprising wins at Le Mans, Indianapolis 500 and the Monaco Grand Prix – which has been held by only one racer since 1972, Britain’s Graham Hill.

Despite countless others who just missed out, such as Stirling Moss – largely considered the greatest racer to never win an F1 title – it’s Lewis Hamilton who makes the last spot, and the headwear from his early days in karting. Currently in the form of his career and only one title behind Schumacher, there’s no saying how many he could end up on, but it all started at Rye House Kart Circuit.