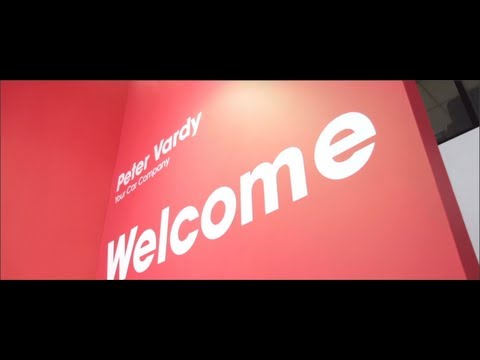 It's no secret that Peter Vardy Ltd have made the Sunday Times' list of Top 100 Companies to Work For, and have awards for the best sales training programme and sales team, but what do we do to make this all happen?

A major part of our success thus far has been the Peter Vardy Rookie Academy. One of the first of its kind, the Rookie Academy provides premier training for anyone wishing to join the company. Regardless of whether or not you've had previous experience in either sales or the automotive industy, Peter Vardy Ltd seeks to employ enthusiastic individuals with a passion for working with people, and Scott Clark, current Rookie in Peter Vardy Kirkcaldy, is one such individual. Scott tells us first hand what attracted him to a career with our company; “I was seeking to begin a new career, and although I had never worked in sales, I had heard other people saying Peter Vardy Ltd treated their staff very well, and the fact that they were closed on Sundays really appealed to me, as it's very important to be able to spend time with my friends and family. I love working with people, and thought that a job as a salesperson was ideal, as I'd be surrounded by colleagues and customers all day and have the opportunity to meet people from all walks of life on a daily basis.” After learning sales techniques and the company ethos in a classroom based environment , Rookies are encouraged to shadow various team members in a workplace setting so they can see just how everything ticks. Scott thought this was a great idea. He says, “I was able to see first hand how the team worked together, and it was really beneficial for me to get to meet the colleagues I'd be working with at a later date, and to fully understand the part they play in the day-to-day running of the dealership. The mentor system that's put in place at the end of training is helpful too, as it makes you feel you're 100% supported at each stage.” We want all of our staff to feel comfortable and happy at their work, because we believe that a happy workforce leads to a much stronger organisation for everyone. The opportunity to progress quickly is also something that appealed to Scott. He admits that in his previous job he was “stuck in a bit of a rut, and there didn't seem to be much room for progression. Peter Vardy Ltd are very focused on staff development, and during my time at the Rookie Academy I definitely felt like my existing skills were being honed into something that would make me an asset to my team.” Generous sales commissions and bonuses for hitting targets consistently mean that everyone in our team has something to work towards, and this instils a desire to keep improving. As Scott mentioned earlier, our company's ethos is something which attracts many people to us in the first place. Scott's previous role as a community support worker meant that he was keen to keep giving back in some way, and he found the ideal way to do that through us. “I was both surprised and impressed when I found out that Peter Vardy Ltd donate 10% of their profits to charity every year. It seemed like the perfect fit for me after my last job! I find it really satisfying to know that the harder I work, the more we can give back as an organisation.” In the final Rookie Challenge before leaving the Academy, we set our Rookies an Apprentice-style task in a charity shop belonging to one of our various associated charities. Scott tells us how much he enjoyed the challenge; “it was great fun being able to work with my colleagues in this sort of way. It was totally different to anything I've ever done before, and once we had completed the task we had to feedback to a Lord Sugar-esque panel, which consisted of company directors and Peter Vardy himself! It was nerve-wracking but it did bring us closer together as a team.” Scott's team came second in their challenge, but he assures us they should have been first! All in all, Scott feels like the Rookie Academy has helped him become a better salesperson than he thought possible, and he feels that the team spirit it inspires makes Peter Vardy Kirkcaldy a very welcoming place to work. His time at the Rookie Academy was “a great experience”, and we hope to provide this level of care for all the future Rookies we encounter.