In 2016, Peter Vardy made the phenomenal commitment to vastly improve the lives of 800 children in East Africa by sponsoring them in collaboration with Fields Of Life. As a result, a select few Peter Vardy Partners were lucky enough to experience Ugandan culture and hospitality, and to witness first-hand the impact this sponsorship makes to the children's lives.

A first-hand account, by Jamie and Sam, Two of the Ten Peter Vardy Partners who visited Uganda in October. 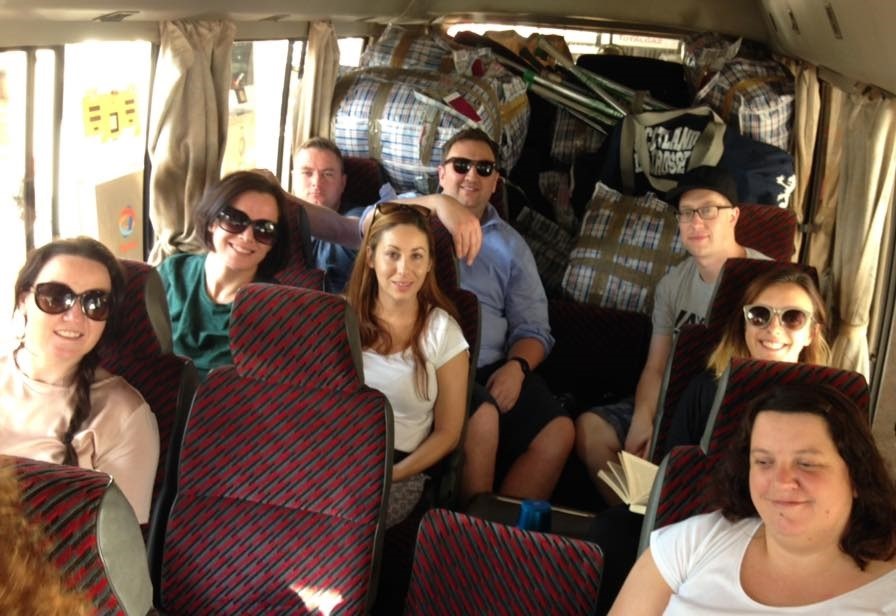 ‘After a full day of travelling to the capital city, Kampala, followed by another day of travelling by bus across the beautiful nation of Uganda, we reached our destination – Nyakabale School, high up in the hills in the Rwenzori National Park region.

Waiting to greet our bus, around a mile away from the school, were around 400 schoolchildren. As if this wasn't enough of a welcome, no sooner had we all stepped off the bus than all 400 children began to sing in perfect harmony the anthem of the school, “The Lamb of God”, and march with us up the hill to the school. This was quite simply the most breath taking and humbling experience of all of our lives, there wasn't a dry eye in the team. 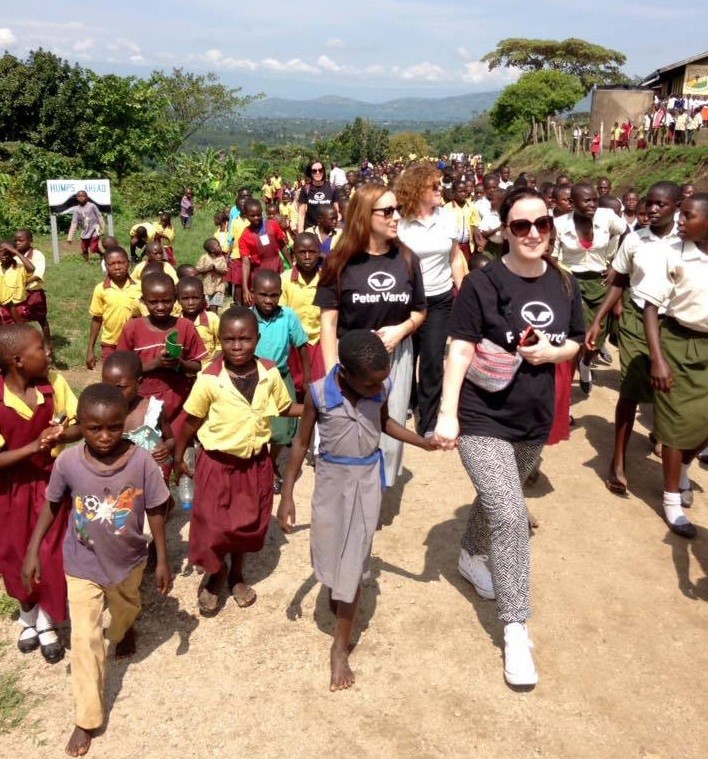 Immediately, it was clear to us what abject poverty these incredible children had to deal with in their lives, with a large number of the group walking barefoot, or in torn and worn-out school uniforms. This did nothing to dampen their spirits, which shone through as they belted out the songs to accompany us all the way to the school itself, where another phenomenal welcome and much of the local community (including the local MP and spiritual leaders) had turned out to greet us.

After speeches by the school leaders, year by year the Primary age children took turns to perform for us, and we were truly treated like celebrities. 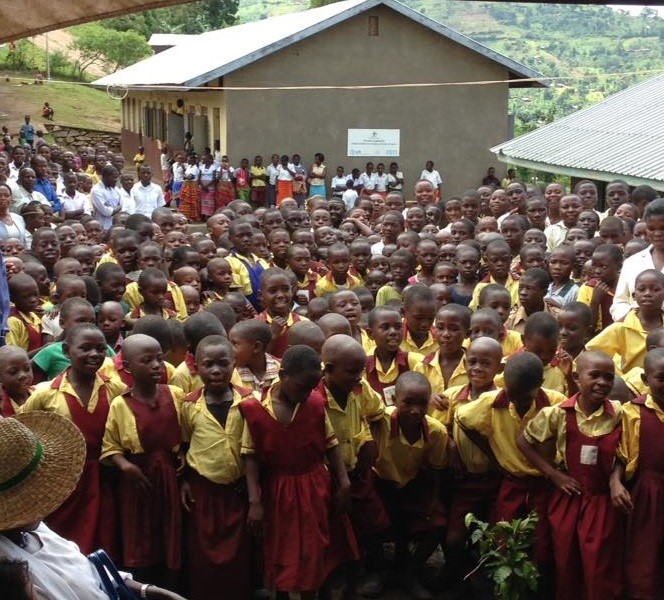 Splitting into groups, we returned the cultural favour – the children had been so keen to show off the local culture, so we decided a cultural tour of Scotland was in order. Working our way through each class, we brought our tiny corner of the world to Uganda, and the kids really seemed to be keen to learn.

Some of the questions the children asked had us taken aback – one child asked if we also cooked our meals on a fire outside, which was something of a reality check for us all. Our National Dress was also the subject of much hilarity, as we invited a volunteer from each class to get the Kilt and “See You Jimmy” hat on and model it for their classmates – I don' think they could believe that the men wear skirts! 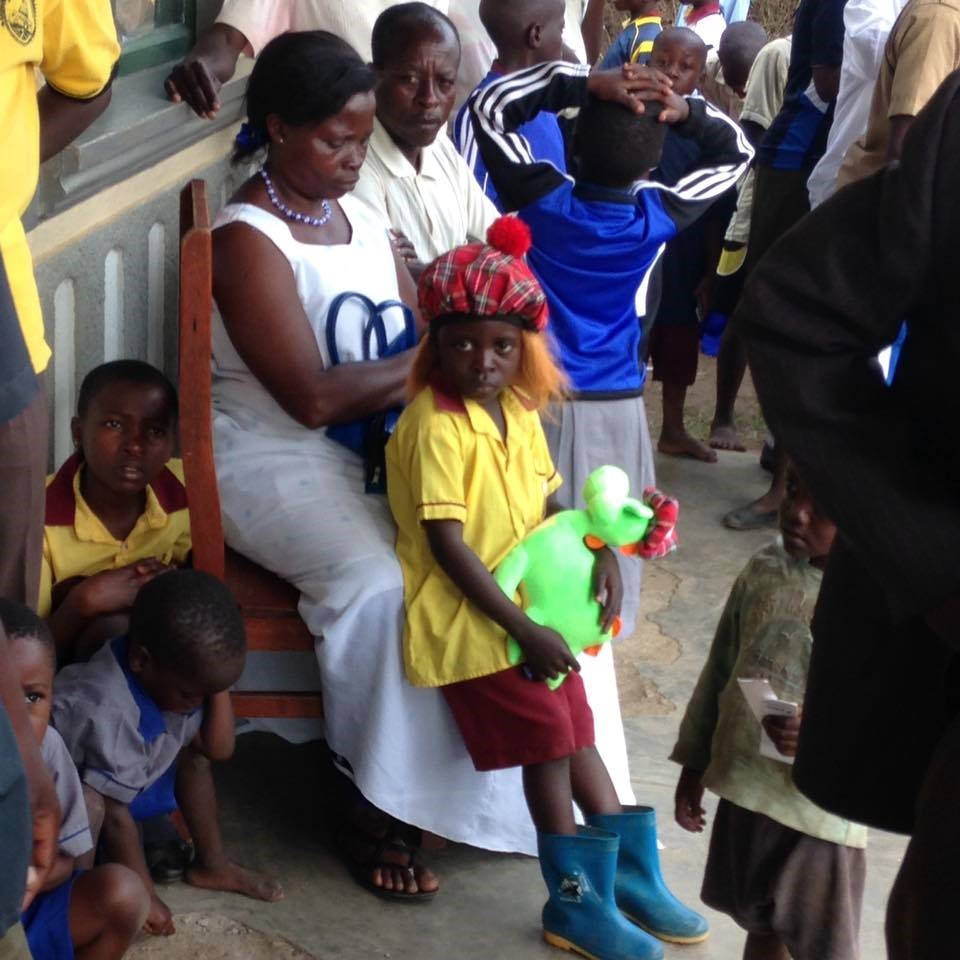 While the Scottish Culture presentation was taking place two members of the group ran P.E. lessons introducing the children to sport from other countries, given that classes sizes ranged from 70 – 130 children this was no mean feat.

The whole team then joined back together to perform arts and crafts with the younger children. It was lovely to see their drawings of what Scotland looked like and of stick figures wearing kilts. One memorable moment occurred when a curious girl having never encountered white skin before cautiously touched the arm of one of group. When he beckoned that it was okay he suddenly had a class of 90 children all huddling round to touch his arm, each one giggling hysterically. 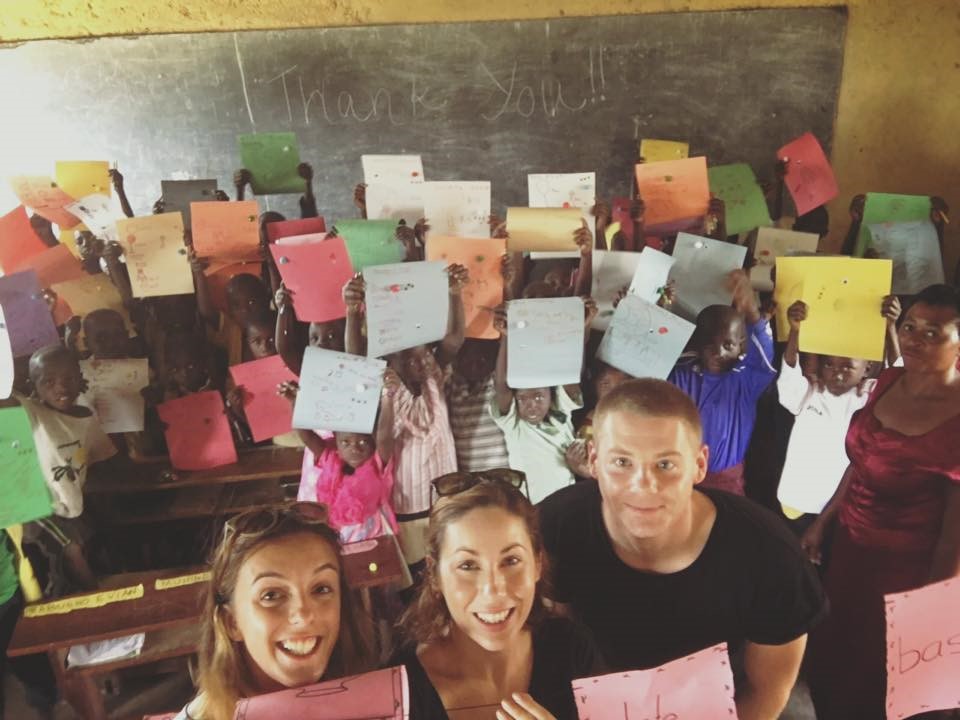 Some of the most rewarding time spent at Nyakabale School was with the Nursery children, who are blessed with the most enormous smiles and a real passion for life. The classes are currently taking place in a Church building, while the very impressive new Nursery building is finishing construction – a building entirely funded by donations through Fields Of Life, proving just how crucial charitable donations are to the education of children in East Africa.

After yet another incredible greeting from the children, we joined in a very colourful parachute game with them, which by adding a football, they developed into their very own game of teamwork, skill and precision. 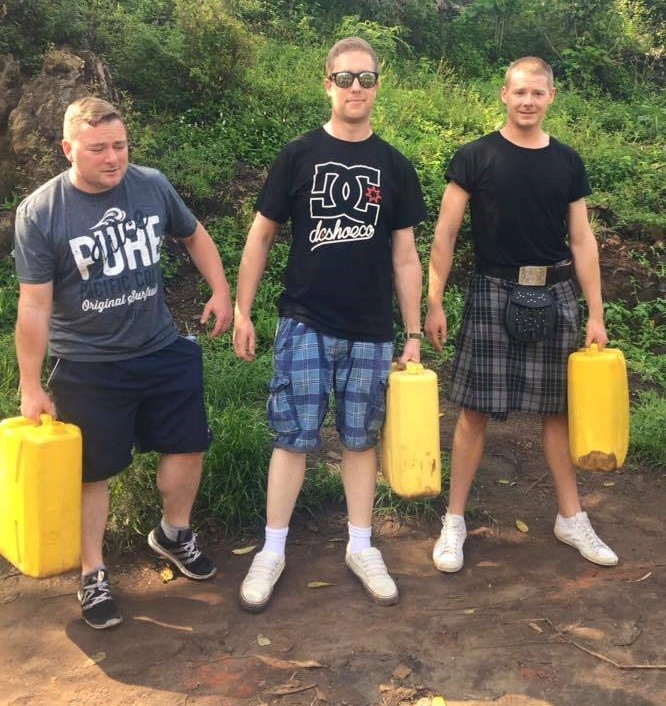 The next morning, we decide to repay our hosts by helping them with one of the most arduous daily task, fetching water from the stream. As the team descended the mile of rough terrain to the stream we became increasingly aware that the return trip would be an incredibly steep uphill hike. Also, seeing the sediment in the water ensured that no member of the group would ever take their tap water for granted again. To prove their machismo, the men offered to carry the tankers back up the hill, one ‘attempting’ the traditional method of balancing it on his head – As our group tired, and were overtaken by a group of older local ladies not breaking a sweat, we quickly realised we were unprepared for the gruelling nature of African life 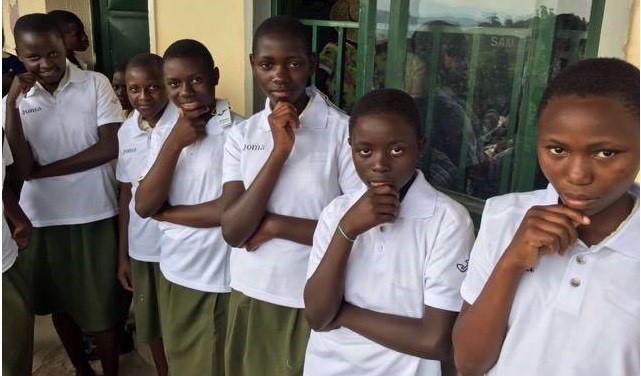 In partnership with Fields Of Life we were able to distribute new clothing, stationary, toys and sports equipment to the children. They all lined up patiently with the team members taking it in turns to entertain the crowd with party pieces and audience participation, there were smiles all round with everyone desperate to try on their new clothes and strike a pose for the camera.

The teachers and children were so excited to use their new equipment that they shut the school early on Friday to have a fun day at the local park, which culminated in a local football tournament. We were all keen to watch the games but our hosts insisted we participate as the locals wanted to see how the ‘muzungu’ (white man) played football. So, with Scottish pride at stake we laced up our shoes and begin to stretch, much to the amusement of the children (their mile sprint to the pitch would suffice as a warm up). Everyone had a fantastic time and two members of our group even managed to score! There were plenty of tears when it was time to say goodbye, mostly from the Peter Vardy team. 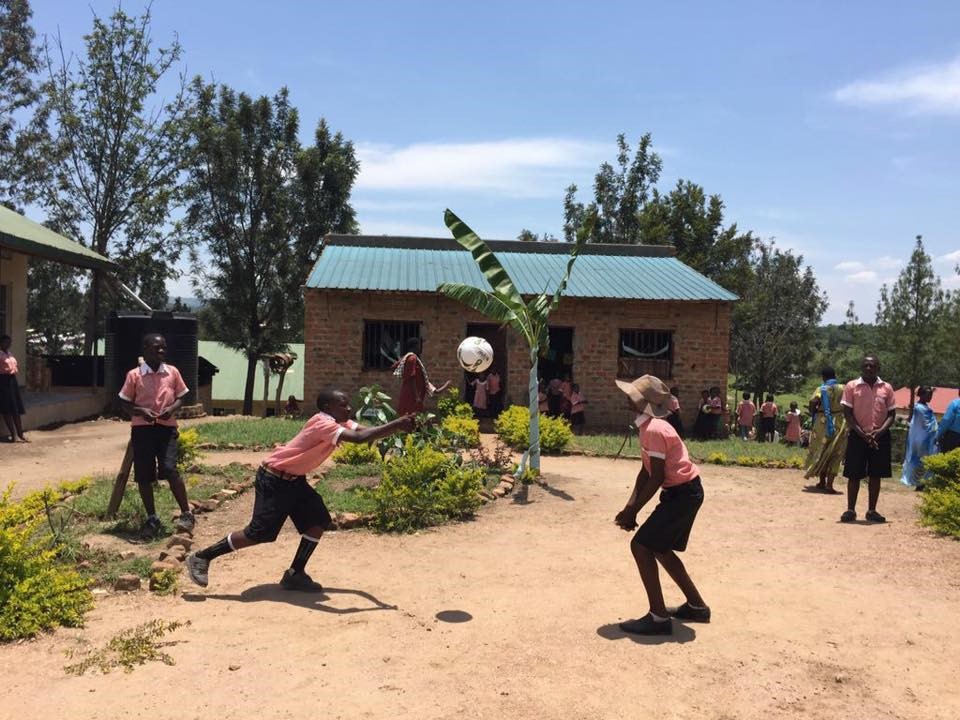 The final leg of our journey saw us visit the Garden Care School in Kamwenge, where Peter Vardy’s sponsorship was helping vulnerable children attend school. Just like at Nyakabale School we were greeted with a warm welcome and paraded to the school in a chorus of pitch perfect singing.

At the school, Fields Of Life representative, Ruth Makanda, gave a heartfelt speech to the parents on the value of an education. She spoke of her own modest background, how education had allowed her to better her life and how their children could do the same. The head teacher then informed us that the parents having seen how others had helped heir community set up their own fund, wealthier parents in the village could then help subsidise education for those children who could not afford to attend school. 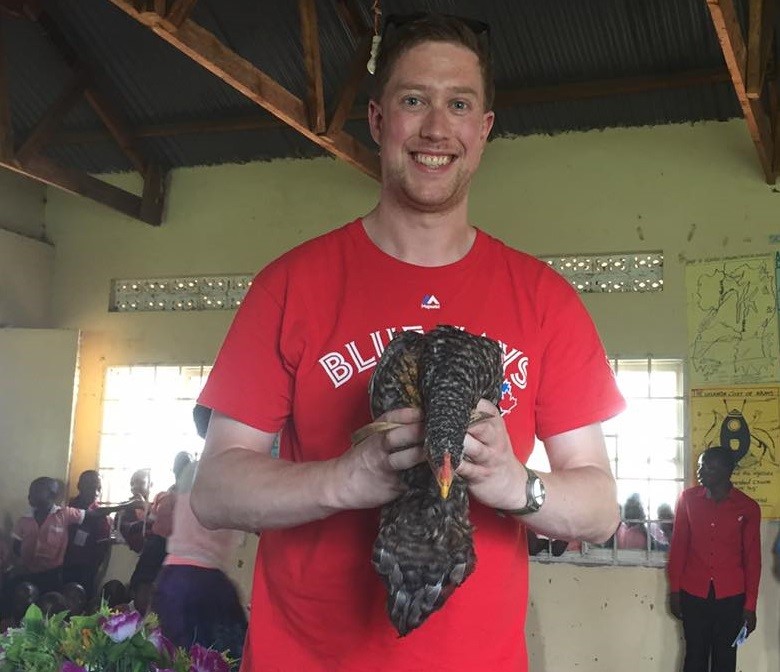 Before we left the parents of the children we sponsored gave us kind gifts to say thank you. The gifts mostly consisted of food grown by the parents and two of our party were presented with live chickens, which certainly made for an interesting bus ride home.

Humbled and once again in tears we begin to make the, 13 hour bus ride and 8 hour flight, journey back to Scotland. These actions really brought home just how big an impact a donation can make to the lives of others. For the price of a trip to the cinema we could send a child to school for a month, where they can gain an education and are guaranteed a hot meal, which in a lot of cases can sometimes be their only meal of the day.'

Find out more about the amazing work Fields Of Life do, and discovery all the giving back work The Peter Vardy Foundation and all our dealerships partake in.