This afternoon, Peter Vardy colleagues launched the venture with members of the Scottish national team and Scottish Rugby’s Director of Commercial Operation, Communications and Public Affairs, Dominic MacKay. After a brief photo opportunity MacKay said: “We’re delighted to have Peter Vardy Limited on board as our most recent addition to our family of blue chip sponsors that include RBS, Macron and Ginger Grouse, among others” “Peter Vardy Ltd is a thriving business synonymous with success in Scotland. We look forward to working together both on international match days and investing in the grassroots of our game. 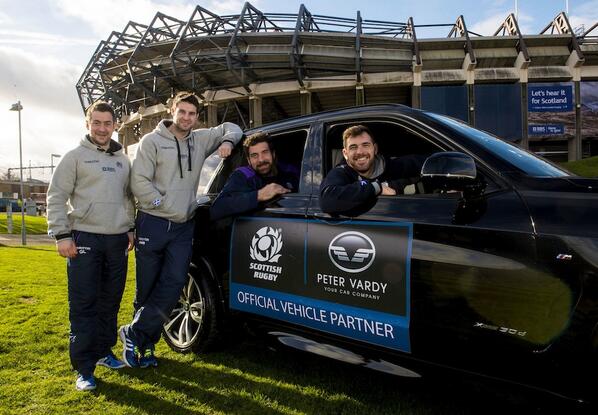 The new relationship means Peter Vardy Ltd will provide a fleet of Vauxhall’s to Scottish Rugby for both players and coaching staff with an emphasis on helping to assist with the development of Youth Rugby at clubs and schools across Scotland.

The first presence Peter Vardy Ltd will have with Scottish Rugby will be at this weekend’s RBS 6 Nations Championship match against England, where a selection of vehicles will be on display behind the east stand and near the ticket centre. The array of cars which will include Land Rover, Jaguar, BMW, MINI and Vauxhall vehicles, will also become a permanent fixture for international fixtures. We are also planning a kicking competition on March 8th for the French Visit at half time with the chance to win a Vauxhall Cascada for a year.

CEO Peter Vardy added his thoughts on the new deal today; “We’re excited to be joining Scottish Rugby on their journey to the World Cup in 2015 and beyond. “We are a young Scottish business, so for us this is a fantastic opportunity to drive our business further and support Scotland’s national rugby team and Scottish Rugby staff throughout the country. “One of Scottish Rugby’s values is community engagement, which is at the core of our business. Their hard work in ensuring that rugby is a sport for all the family both on and off the pitch was something that attracted us to the partnership. “We, like Scottish Rugby, want to grow our business and this partnership gives us an opportunity to do that together.

The partnership will create a sports marketing platform which I am sure will be mutually beneficial to both organisations. "We very much look forward to working together over the next three years.” More information and to enter our competition: rugby.petervardy.com