Jaguar started life as the Swallow Sidecar Company, founded in 1922 by two motorcycle enthusiasts, William Lyons and William Walmsley to produce motorcycle sidecars in Blackpool where they lived. From the very start, Lyons knew the importance of style – until then, they had been rather ugly. But the Swallow sidecars, as they were known, were striking, attracting a lot of interest and healthy sales. In 1934 Walmsley elected to sell his part of the business prompting Lyons to form SS Cars Ltd. funding the replacement of Walmsley’s investment by issuing shares to the public. 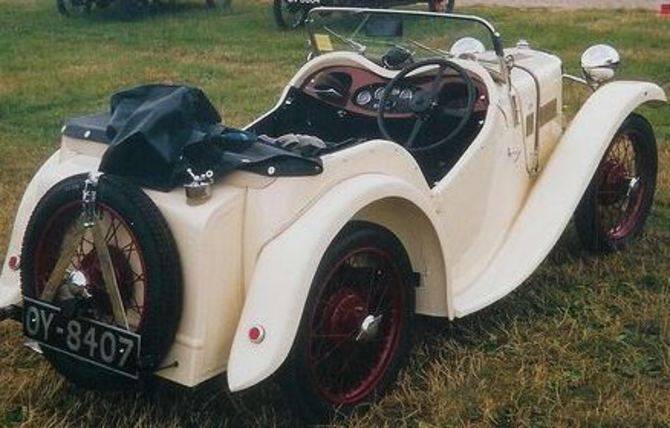 Lyons turned his attention to cars, offering stylish bodies on popular chassis, the first and best known of these was the little Austin 7 Swallow.

Lyons and SS Cars were quickly gaining a reputation for building stylishly iconic cars. Lyons took this opportunity to evolve his thriving company a step further and arranged for the Standard Motor Company to produce engines and chassis to fit his latest designs, the SS I and SS II Coupés, which consisted of long, low rakish bodies, although hailed for their beauty, their performance did not live up to their looks. 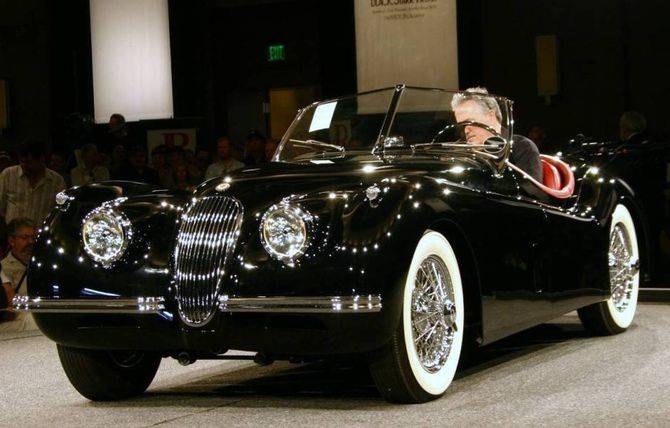 Lyons spent the next few years improving the SS model range and in 1935 launched a car whose performance matched its looks – he named them SS 100 Jaguars. On 23 March 1945 the SS Cars shareholders in general meeting agreed to change the company’s name to Jaguar Cars Limited. Said Chairman William Lyons
“Unlike SS the name Jaguar is distinctive and cannot be connected or confused with any similar foreign name.”

At the 1948 Motor Show the XK 120, with the new XK engine, stole the show. Lyons had designed a sensationally beautiful and ultra modern open two-seater body. With a powerful engine, the 120 promised racing car performance on the road, yet with practicality and comfort. The orders flowed in and the XK 120 led Britain’s crucial post-war export drive, becoming the epitome of Hollywood style. Around 60% were exported to the USA, earning vital dollars to rebuild war-torn Britain. 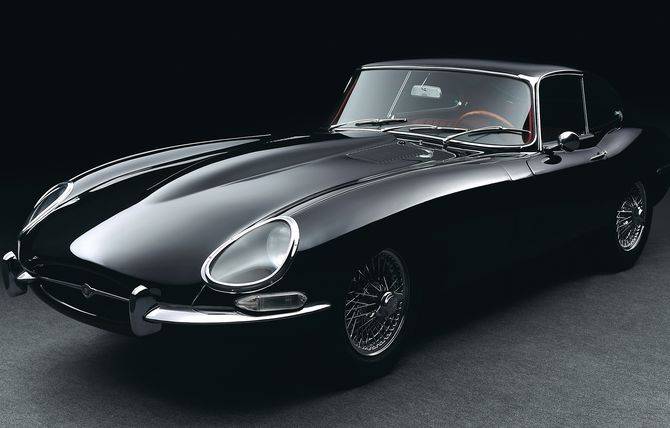 The XK was also making a tremendous name for itself on the world’s racetracks and provided an important breakthrough for a young man called Stirling Moss. With Le Mans 24-hour race providing unparalleled publicity worldwide, Lyons was determined to win it. The competition model, designed the XK 120C or simply C-type, was based on the XK 120 but with a lighter body and chassis. Jaguar famously took victories in 1951 and 1953.

In 1961 the E-type was launched at the Geneva Motor Show, another enormous success for Jaguar, its pure lines and stunning sculptural shape epitomised its generation, as the XK120 had in the late 40’s. Over the coming years Jaguar built bigger and more powerful engines while staying true to the beauty of the brand and in 1971, Jaguar’s V12 engine was the first to be produced in quantity and enhanced Jaguar’s reputation for engineering integrity and innovation.

Lyons’ intention to build the business by producing world-class sporting saloons in larger numbers than the sports car market could support, hampered the growth of the Jaguar brand and in 1965 he accepted British Motor Corporation’s (BMC) offer to merge with Jaguar to form British Motor Holdings Limited (BMH). After almost 20 years, the merger was proving unsuccessful and resulted in Jaguar being floated off as a separate company on the stock market in 1984. Purchased by the American brand Ford, Jaguar never managed to deliver the style or performance of the brands heritage. Ford took the decision to sell Jaguar, along with another British brand, Land Rover to TATA motors, who merged the two businesses to become Jaguar Land Rover.

Jaguar is now enjoying a resurgence of its illustrious heritage, producing stylish, performance driven cars – the incredible F-Type Coupé is drenched in Lyon’s drive for outstanding beauty, performance and comfort.

Click on the button below to browse our Vintage Jaguar Car collection. Looking for a specific model? Contact us today.