Did you pass your practical test first time? Or did it take multiple attempts to get your driving licence? Many think they’ll pass with flying colours on the first attempt and be out on the road in no time. But is it as quick and simple to achieve a pass as people think?

Here at Peter Vardy, we wanted to uncover the reality of passing a driving test in the UK. Are you more likely to pass in certain areas of the country? And which parts of the theory and practical tests cause the biggest issues for learners? We surveyed people across Britain and analysed DVSA data to find out.

Passing the practical: how many times does it take?

It’s been revealed: most Brits will fail their practical test first time around. According to the DVSA, the 2019/20 pass rate for practical tests is 46.4% in the UK – which means most learners will have to endure test stress more than once.

So, just how many times does it take to successfully pass the practical? On average, UK adults will face the test 2.1 times before achieving a successful result, and 12% will need more than three attempts. Further to this, research has revealed that a huge 1,035,358 Brits need six attempts to pass their practical driving test - which got us thinking, what are learners struggling the most with during their exam?

Perhaps unsurprisingly, parallel parking is the trickiest manoeuvre to master, with 56% of respondents saying this was the hardest part of the practical. In second place was reverse bay parking (38%), followed by the all-important three-point turn in the road (29%). Going against stereotypes, it turns out that men are more likely to struggle with three-point turns than women (38% vs 21%) as well as parallel parking (69% vs 41%).

Fail-safe spots: where are you most likely to succeed?

With these interesting statistics coming to light, we were intrigued to find out if the location of a driving test affects how likely Brits are to succeed. After analysing the data, we were able to rank areas across the UK in line with their pass rates. Each of these locations conducted a minimum of 2,000 practical tests in 2019/20.

It seems that those in Norwich have the highest chance of success in the UK, with an above average pass rate of 55.2%. This was closely followed by Poole on the southern coast (54.6%) and Middlesbrough in the north east (53.3%). Perhaps the fresh sea breeze near the coastline makes for more attentive learners…

Interestingly, when it comes to pass rates, the best areas don’t quite align with the individual centres.

Yeovil, Ipswich and Dundee test centres came top, all achieving way above average pass rates of over 60% (64%, 62% and 61% respectively). Overall, those hoping for a first-time pass are best heading to Norwich for their practical – as it ranked within the top 10 positions for both test centre and area.

Areas to avoid: where are you less likely to pass?

So, where in the country should you avoid buckling in for your practical? It turns out Stoke-on-Trent is the worst area to take your test in the UK, with a lower than average 37.8% pass rate. Wolverhampton, Birmingham, Luton and Greenford were all close behind, scoring a mediocre 38%. It seems that those taking their test in particularly hilly parts of the country also struggled to succeed, with over a third of people from Sheffield (36%) revealing it took them four times to pass their practical.

How does this compare to individual test centres? It’s been revealed that the Erith test centre in London has the worst pass rate in the UK, with just 30.57% of people achieving the desired result. We also found that test centres in the Greater Manchester area have much lower than average success, with Rochdale and Bury both ranked within the worst 10 (31% and 35% respectively). But this isn’t restricted to just these areas - our research shows that many Mancunians find it difficult to obtain a satisfactory score. On average, it takes them 2.6 attempts to pass their practical, which is slightly higher than the national standard.

What about the theory?

While the majority of Brits will struggle to triumph during their first practical driving test, most will ace their theory. It’s been revealed that 70% of drivers passed their theory test first time, and on average Brits achieve success after just 1.6 attempts.

Having said that, a whopping 1.8 million took three attempts to pass their theory test. That’s a huge number of people struggling to get to grips with the hazard perception, road signs and safety aspects of being on the road. So, which parts of the theory test do road users find the most difficult? 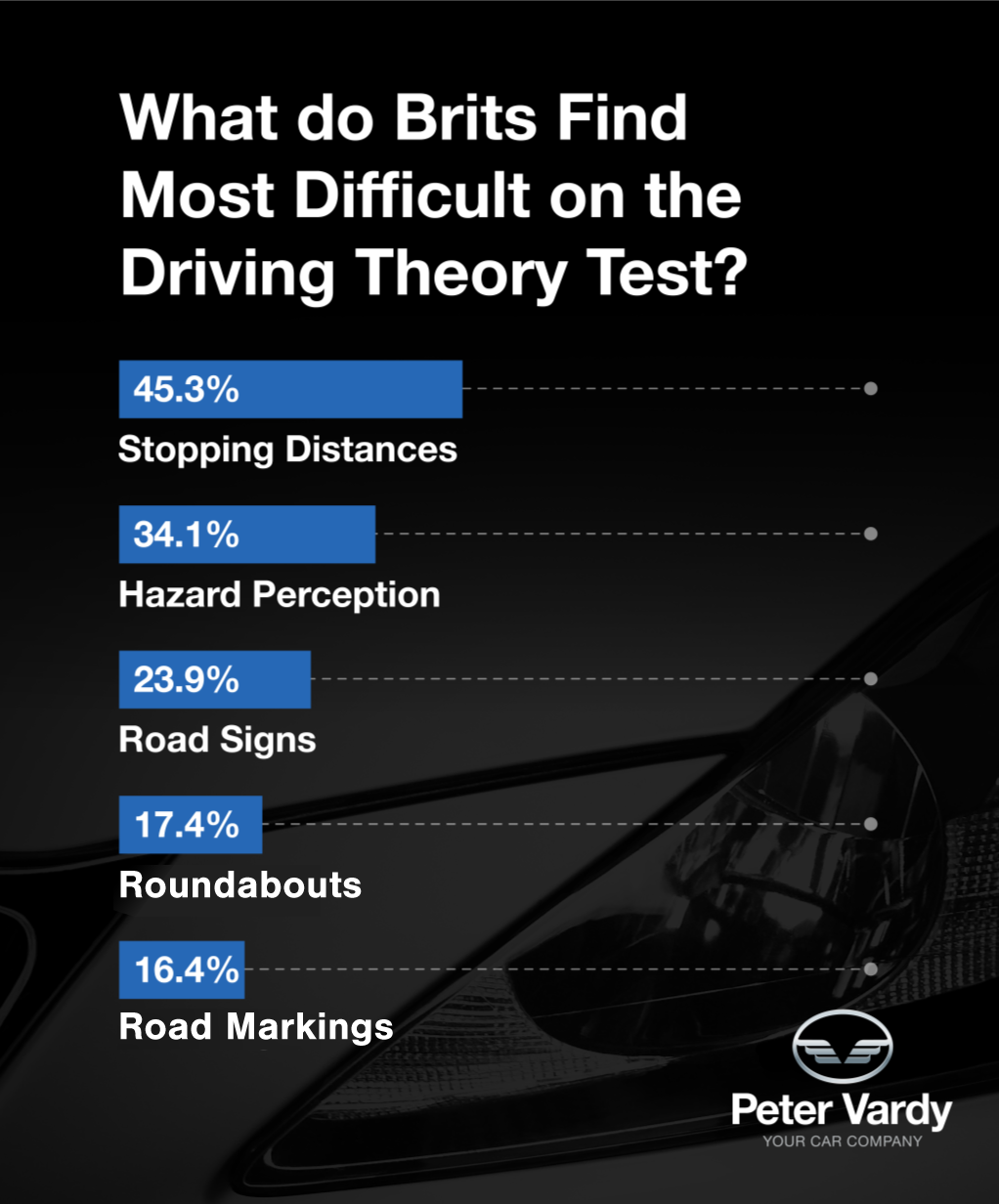 Out of all elements of the theory test, just under half of drivers (45.3%) rated stopping distances as the most difficult to grasp. This shocking statistic is particularly worrying, as the RAC states that tailgating which results in inadequate stopping distance is one of the biggest causes of road accidents in the UK.

On the other hand, understanding road markings are most likely to get drivers good scores during the test, as only 16.4% said this was the most difficult to grasp.

In the end, it doesn’t matter whether you pass first, second or sixth time around. The important thing is to drive safely and pay attention to what’s going on around you.