Do you think you’re a good driver? Many of us may believe we’re never in the wrong on the road, while others lack confidence altogether. However, from speeding to driving without insurance or failing to stop at traffic lights, the majority of us will commit at least one driving offence in our lifetime – but who are the least likely to be in the wrong on the road?

Here at Peter Vardy, we decided to investigate a little further. We surveyed people across Britain and tallied up our findings with data from the Office for National Statistics and the DVLA to find out which drivers consider themselves the best, what others think of their driving ability, and how these perceptions compare with the driving offences recorded across the country.

Buckle up for the results…

What are Brits most likely to be stopped or prosecuted for?

Almost half of Brits state they have never been caught, cautioned or prosecuted for driving offences. Of those who have, the most common reasons are speeding, driving whilst disqualified or driving without insurance. Worryingly, 37% of Brits admit to having driven with defective parts such as faulty brakes or worn tyres. 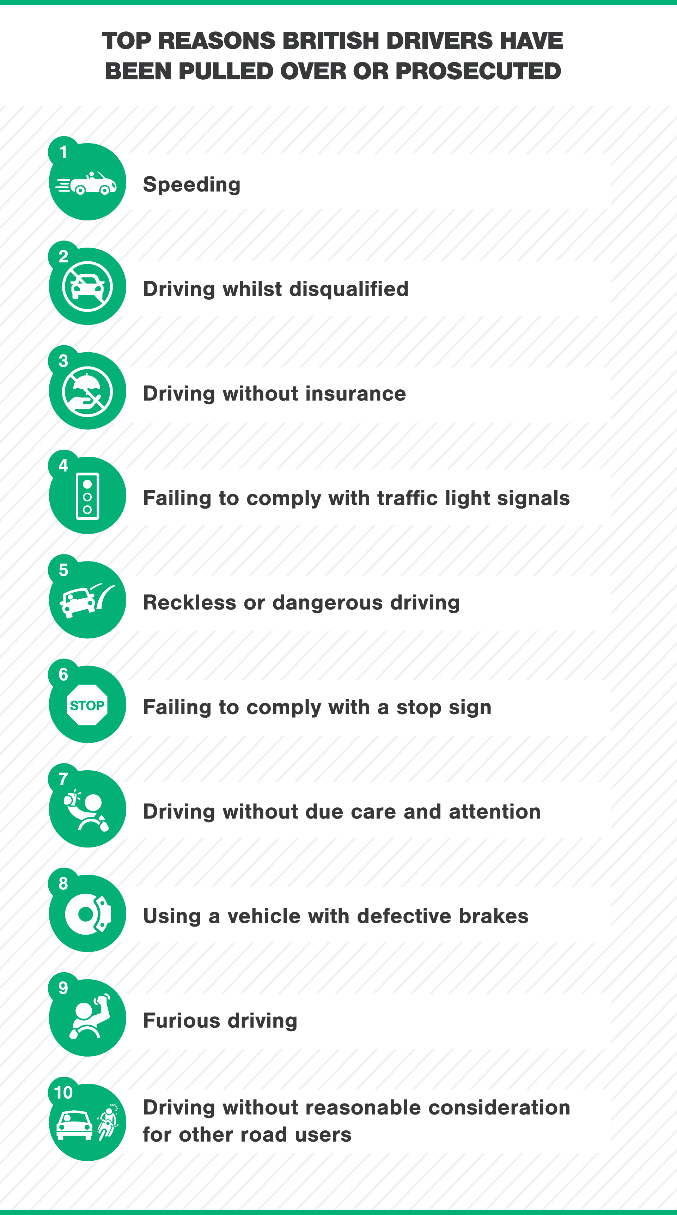 Perhaps unsurprisingly, people rate their own driving ability higher than they do others. Confidence in ourselves isn’t that high, however – only 1 in 10 UK drivers consider themselves a pro, while over 1 million of us score ourselves a lowly 2 out of 10 behind the wheel.

What makes of car should you be steering clear of on the road? It turns out that grey Vauxhall drivers are the nation’s safest, while those driving green Audis are Britain’s most likely to have been involved in an offence. BMW drivers meanwhile are the most likely to earn speeding or reckless driving offences, while drivers of red cars are 10% more likely to speed than those driving in white or cream. 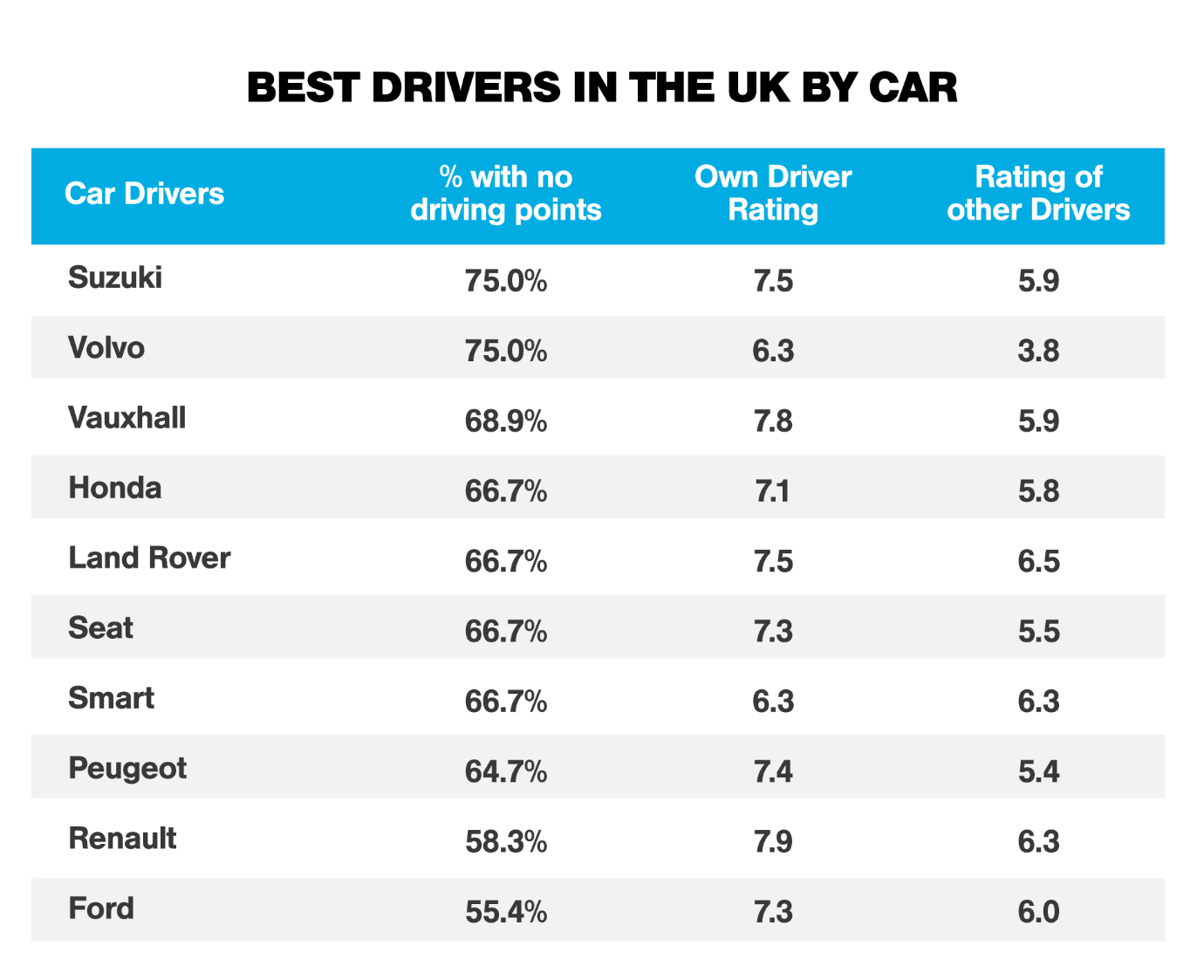 Suzuki, Volvo and Honda drivers are all amongst the best behaved, with 75%, 75% and 67% having no points on their license respectively. Vauxhall drivers have the highest opinion of their own driving, while Volvo owners rate other drivers only 3.8 out of 10 on average.

Many of us are proud of where we live - so much so that we rate our own driving higher than those from other cities. Liverpudlians score themselves on average 2 marks out of 10 higher than other road users, while 15% in the capital give themselves a 10 - but rate others only 6.5. 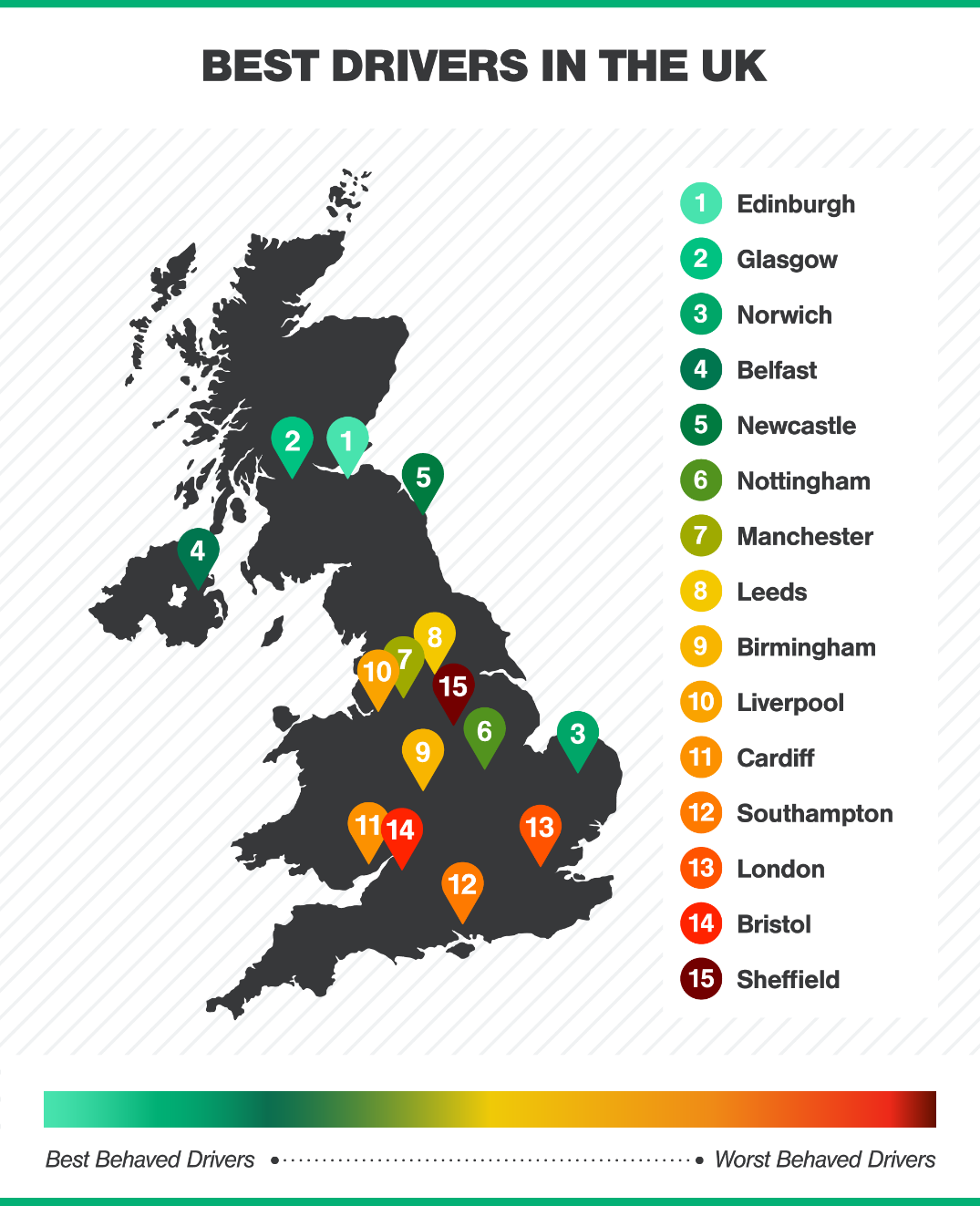 Of the worst offenders, only 20% of Sheffield residents surveyed had no driving points, while Bristolians and Londoners were next up with 35% and 38% respectively.

It seems the Scots are better behaved, with 67% of Edinburgh drivers and 64% of Glaswegians having a clean license. Glasgow drivers are three times more likely to be caught speeding than their Edinburgh neighbours, however.

Driving ability is a common argument in the battle of the sexes. The majority of the men we surveyed declared themselves better behind the wheel than their female counterparts - despite being 10% more likely to have been caught speeding.

It’s not all good news for women, however. Compared to men, women are more likely to be caught driving without insurance (13% vs 4%) or driving whilst disqualified (15% vs 2%).

It’s well known that age and experience can significantly affect car insurance premiums. Whether that’s fair or not, the over 65s we spoke to rated their driving ability the highest of any age group, while 55-64 year olds are the least likely to commit a driving offence - 73% stated that they have never been caught, cautioned or prosecuted.

In the end, it doesn’t matter where you come from, what car you drive or how old you are, we all need to take due care on the road. At Peter Vardy, we’re committed to safe and sensible behaviour behind the wheel.